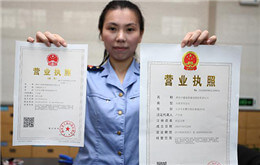 8 Q & A of “Three in One” China Company Business License

What do you need to notice when using new version of business license? Here Business China summarizes 8 common problems after new enterprises are set and answers as follows:

According to Article 2 of Notice of State Administration of Taxation on Implementing “Three in One” Registration System Reform (Shui Zong Han [2015] No. 482), as per the relevant work arrangement, “Three in One, one code for one license” registration reform is overally carried out nationwide on October 1, 2015.

After receiving the business license with the unified social credit code of the legal person and other organizations (hereinafter referred to as unified code) approved and issued by the industrial and commercial administration department, newly-established enterprises and farmer’s professional cooperatives (hereinafter referred to as the “enterprises”) no longer needs to carry out tax registration again and no longer receive tax registration certificate. When handling tax-involved matters, after completing collection of supplementary information, the enterprises can use the business license with unified code instead of tax registration certificate.
Except for the above circumstances, the other tax registrations shall be carried out as per the original legal system.

2. Does it belong to overdue registration if the company does not register in the tax authority within 30 days after Three in One?

Answer: If the enterprises does not register in the tax authority within 30 days after obtaining “Three in One and one code for one license” license, it does not belong to overdue registration.

3. After “Three in One”, what change does the taxpayer identification number have?

4. After “Three in One” registration system is implemented, does the newly-established enterprise need to put on stamp duty?

5. Shall information change be applied for to the industrial and commercial management department or the competent tax authority?

Ask: Shall the enterprises changing new Three in One license apply to the industrial and commercial management department or the competent tax authority in case of change of three information, production and operation address, financial principal and accounting method?

6. How long is the transitional period of “Three in One” registration system reform?

Answer: According to the work arrangement, the transitional period is until December 31, 2020 and before December 31, 2020, the industrial and commercial registration department will complete the renewal work for the enterprises obtaining industrial and commercial business license before September 29, 2015. During the transitional period, the original tax registration certificates approved and issued before reform remain in force.

7. After “Three in One”, shall the original licenses owned by the enterprises be replaced?

8. How to invoice for Three in One enterprises?

If the opposite party is a Three in One enterprise with a 18-digit credit code, but the machine of this enterprise sets the taxpayer identification number as 15-digit, how to invoice now?

Answer: When invoicing for newly-established enterprises, generally, 18-digit credit code will serve as the taxpayer identification number for invoicing.