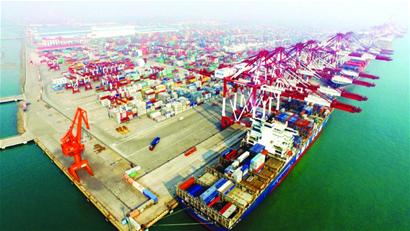 +86-020-2917 9715 proposal@set-up-company.com
The report of the19th National Congress of CPC: "promoting the formation of a comprehensive open new pattern" is described in part on the construction of future free trade zones as follows: "to give free trade zones greater autonomy in reform and exploration of free trade ports." The reporter understands that Shanghai, Tianjin and other cities now have proposals to build a free trade port, the report will "explore the construction of free trade ports" to future national development plans. There was no doubt that there was a strong reaction among the representatives, experts and scholars and researchers of the 19th National Congress of CPC. This gives the followers great encouragement and inspiration.

It is understood that the free trade port is also known as the "free port". It is a port area located in the territory of a country, outside the customs administration level, which allows foreign goods and funds to enter and exit freely. All or most of the goods in and out of the port are exempted from duty. Allow for the modification, processing, long-term storage or sale of business activities within the port, tariffs must be paid only when the goods are transferred to the dutiable areas of the countries where the free trade ports are located.

"This major decision is a major strategic decision of the CPC central committee," Zhao said. Its strategic significance is comparable to the policy of the economic zone in the 1980s, which fully demonstrates the determination of China's reform and opening up.

At present, there are 11 free trade zones in our country, and if it is upgraded to a free trade port, Shanghai is the best condition.

Guangdong, Tianjin, Fujian and other free trade zones have their respective strengths. But he thinks Tianjin is the most significant, broadest and most promising.

The free trade area of Tianjin with the Shanghai free trade zone is a core mission of institutional innovation. In order to promote the development of the Beijing-Tianjin-Hebei region, we will make efforts to become an open platform for the development of the Beijing-Tianjin-Hebei region, the front area of the national reform and opening and the test field of system innovation, and the world high level free trade zone. Sun Zhijie, head of the department of customs and excise department of Tianjin, said, Tianjin customs will accelerate the construction of a free trade zone. They will support enterprises to carry out the commodity spot bonded trade, parallel import car transfer, international transshipment container shipping container, etc. and support the development of new trade formats and boost the scale of cross-border e-commerce, and support automobile parallel import, finance lease and bonded maintenance.

"Exploring and constructing free trade port area" is a great strategic opportunity for Binhai new area. Dr Jiang Ning, the coastal comprehensive development research institute, said: "as the second approved national new district, Binhai new area is not only the undertaker of national strategy but also the starting point of national strategy. In the past ten years, Binhai new area has been the first strategy in the east, and has been responsible for comprehensive supporting reform and regional development. In the new period, Binhai new area is in the intersection of Beijing-Tianjin-Hebei and One Belt And One Road. The opening of internal and external is the necessary choice to form a new era economy.

After several years of operation, the development of free trade area has achieved certain achievements. It is clear that China's open door will only grow larger and greater to support further liberalization of investment and trade facilitation. In order to break down the institutional mechanism that restricts the further development of the free trade area, the direction is clear. He believes that the Tianjin free trade area is the only free trade area in the Beijing-Tianjin-Hebei region, with the policy advantages of reform and innovation highland. In the construction of the new area of the Xiong'an district, there is a special position to provide support for the development of the new area. For the successful innovation of the system, we can extend the service to the new district of Xiong 'an. It can play a role in attracting resources and reconfiguring resources.