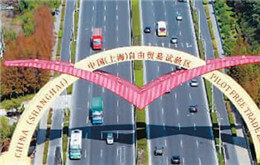 Yesterday, "the Shanghai Free Trade Port preliminary program has been out of the furnace" news made the related concept stocks rise again, Zhuhai port, Guangzhou port, Xiamen port, Shanghai port and Pongsin resources stocks rose more than 2% on the same day in fact, it is understood that, in addition to Shanghai, Xiamen, Guangzhou, Nansha and other places are also working on the preparatory work of the free trade port. The plan is actively planning, which will be an important catalyst for the future performance of the free trade port theme.

In this regard, south-west Securities said that the free trade port is one of the specific forms of free trade area. There are many famous free trade ports in the world, such as Hong Kong, Singapore and so on. According to international practice, the free trade port has a higher degree of freedom in tariff reduction, customs clearance, enterprise establishment, capital import and export, etc. The attractiveness of foreign capital will increase significantly. This helps port upgrading from a shipping center to a trade and financial center, which will greatly drive the economic development of the relevant regions and bring opportunities to the relevant listed companies in the region.

According to the insiders, from the internal conditions, Shanghai's free trade port is more mature than other possible areas. From the perspective of the theme of investment analysis, Shanghai port, airport, logistics and other three companies are expected to take the lead in a benefit, the proposals concern the Hong Kong Group, Shanghai airport, CTS logistics etc..

Shenwan Securities said that the construction of the free trade port is expected to be rapidly expanded to other conditional port areas, such as Guangdong and Tianjin. This view is similar to the view of Southwest Securities, which indicates that the next step in promoting the construction of free trade ports in Hainan and Guangdong is also very high. We can pay attention to the relevant beneficiary shares: Hainan high speed, Guangzhou port, Xiamen port and so on.

In addition to the port, logistics and other direct benefits of the free trade port construction sector, the region's financial, high-end manufacturing and other areas are also favored by some agencies. The Northeast Securities said that the free trade port is actually the most open - level trading area. Its openness is mainly embodied in many aspects, such as tax, finance, retail, shipping and so on, and the financial industry in the region will also usher in a rapid development.

From the secondary market, in the great wisdom 21 free trade port stocks, the Hong Kong Group, Pengxin resources, Jiacheng international, real estate, Guangming EASTTOP, Ningbo port, Guangzhou port, CTS logistics, logistics alliance and the shares of 10 stocks in the last 30 days was given a "buy" or "overweight" rating value, market performance worthy of attention. Among them, the group has been bullish by the organization, and the number of ratings has reached 9 in the last 30 days. The Securities said: the company's leading port business, diversified development in the forefront of the industry, the Bank of Shanghai, postal savings bank investment will contribute more revenue, real estate business is also about to enter the harvest period. Shanghai is expected to take the lead in the free trade port construction on the basis of the FTA, which will bring new development opportunities to the company, and the company's long-term value will be highlighted.