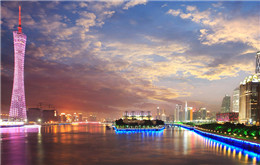 The state bureau of foreign experts released the list of “2017 charm China – the most attractive Chinese city in the eyes of foreign talents” at the 16th China International Talent Exchange Conference held recently. Guangzhou was selected within the top 10 again, following 2011.

Participating numbers of Nobel Laureates trumps all the previous years.


To recognize the contribution of the winning cities in their efforts to create a better business environment of China, "Charm China - the Most Attractive Chinese City in the Eyes of Foreign Talents" is a selection campaign approved by the State Council and the Central Propaganda Office and sponsored by the State Bureau of Foreign Experts.

The Charm China city list selection campaign is the first one in China completely selected by foreign talents, which has been held by eight times. Among them, a total of 4 Nobel laureates participated in the selection - including Dutch theoretical physicist, 1999 Nobel Prize-winning physicist Gerardus't Hooft, Israel and Switzerland Biochemist, 2004 Nobel Prize Winner in Chemistry, 2011 China Government Friendship Award winner Avram Hershko, Israeli chemist and materials scientist, 2011 Nobel Prize winner in chemistry Danny Shechtman, Russian-born Dutch and British physicist, 2010 Nobel Prize winner in physics, and Andre Geim, Chinese Academy of Sciences' foreign academician. The number of Nobel Laureates participating in the selection has reached the highest by comparing with the past.


In 2017, Guangzhou continuously explored the implementation of the introduction of foreign intellectual projects, brought in more foreign talents, implemented the national permit system for foreigners to work in China, and launched national-level intelligence projects in Guangzhou.

The "Guangzhou Talent Green Card System" implemented in Guangzhou provides a solution to the foreign talents working in Guangzhou to solve the worries of legally working and living in China. It has issued a total of 3,300 copies; it fully implements the State's reform measures concerning foreigners' work permit system in China and accepts 14,410 applications from 7299 foreign enterprises in the city

It is worth mentioning that the China Overseas Talent Exchange Conference held in December 2017 and the Guangzhou Science and Technology Exchange for Chinese Returnees attracted 31 countries (regions) from the United States, the United Kingdom, Germany, Australia, and the Commonwealth of Independent States. More than 3,500 overseas talents participated in the conference, fully demonstrating the role and influence of the national-level overseas talent exchange platform.


The Ultimate Guide for China WFOE Formation in 2018